The 1066 Story and Hastings Castle 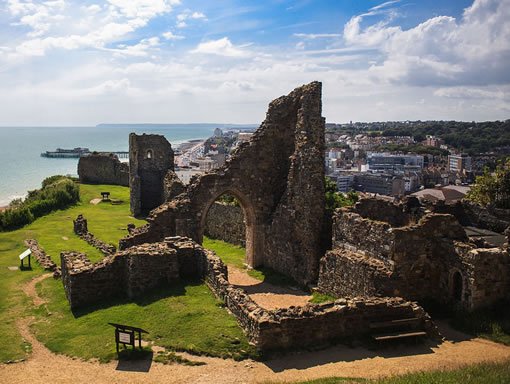 Along with Pevensey and Dover, Hastings Castle was amongst the first motte-and-bailey castles built by William of Normandy in the immediate period following his invasion in 1066. It was originally a timber structure that he carried across the English channel aboard his invading fleet. In 1070 William ordered Hastings Castle rebuilt in stone.

In the thirteenth century King John ordered the castle destroyed by to prevent it being seized and used as a base for attacks but in 1220 Henry the Third refortified it. In the centuries since parts of Hastings Castle have been lost to erosion of the fragile sandstone and clay coastal cliffs on which it sits. On clear days though the castle and cliffs offer fine views as far as Beachy Head as well as of both new and old parts of Hastings.

How To Get There.
Note directions are for the nearby sister attraction Smugglers Adventure.